Benjamin Franklin is best known as one of the founding fathers of the United States. He defended the American cause, and helped write the United States Constitution and Declaration of Independence.

But Franklin wasn’t just a politician. He was a polymath.

As a scientist and inventor, Benjamin Franklin was the father of electricity. His fascination turned to obsession when he accidentally shocked himself, which led him to experiment in earnest. This would culminate in his invention of the lightning rod, which continues to serve us well today.

Outside the realm of science, Franklin contributed to literature as well. He was a leading author, newspaper publisher and an essayist. His works included Poor Richard’s Almanac, as well as his own autobiography.

Despite being born into a poor family and only receiving two years of formal schooling, Franklin’s contributions are astounding. He was the very definition of the self-made man. He has led, what Walter Isaacson would call, An American Life.

One factor thought to have contributed to Franklin’s success was his habit of keeping a journal. Franklin kept multiple journals throughout his life, and used them in ways which most of us wouldn’t have envisaged. While the benefits of journaling are well-documented today, it certainly wasn’t the case back then. That set Franklin apart from the other brilliant men of his time.

Let’s take a look at how Franklin used his journals, and hopefully get a glimpse of what was going on in his mind.

Franklin was a particularly disciplined man. It certainly comes as no surprise when you consider his numerous accomplishments.

He religiously followed a schedule, which he kept in his journal. As he noted in The Autobiography of Benjamin Franklin:

“The precept of Order requiring that every part of my business should have its allotted time, one page in my little book contained the following scheme of employment for the twenty-four hours of a natural day

If this sounds like a modern-day calendar, you wouldn’t be wrong. Franklin understood the importance of planning how his time would be used. More importantly, he tracked its usage and made corrections as required. As Peter Drucker has said, “what gets measured gets managed”.

This was the simplest use of Franklin’s journal. Research has shown that keeping a schedule is more effective than keeping a to-do list. When you carve out time for a specific activity or project, you’re far more likely to stick to it. If it’s not on the calendar, it doesn’t exist.

There’s no one specific purpose for keeping a journal. If you’re struggling to keep one, start by using it for productivity. You can afford to be more detailed when you keep track of your activities with a journal instead of a calendar. It’s not the most attractive benefit that people point to when they recommend you journal, but it makes a huge difference over a lifetime.

The Power of Accountability

Franklin didn’t just talk about self-improvement. He actually lived it and took steps to make sure that he wasn’t lying to himself.

Franklin’s drive to improve himself was a key to his success. His quest for excellence was all-encompassing, as he sought to improve professionally, mentally, and morally. His pursuit of the latter began at the age of twenty when Franklin conceived of a system that would push him to adopt more virtuous habits.

To that effect, Franklin decided on thirteen virtues which he found particularly desirable. But unlike others who merely spoke about it, Franklin created a list and documented his progress in his journal. He writes:

My intention being to acquire the habitude of all these virtues, I judg’d it would be well not to distract my attention by attempting the whole at once, but to fix it on one of them at a time; and, when I should be master of that, then to proceed to another, and so on, till I should have gone thro’ the thirteen

The thirteen virtues he sought to acquire were charted carefully. He would evaluate himself at the end of each day, placing a dot next to each virtue he had violated. His goal was to minimise the number of marks in his journal. If he managed to keep his journal pristine, it would be an indicator that his life was of virtue and not one of vice. 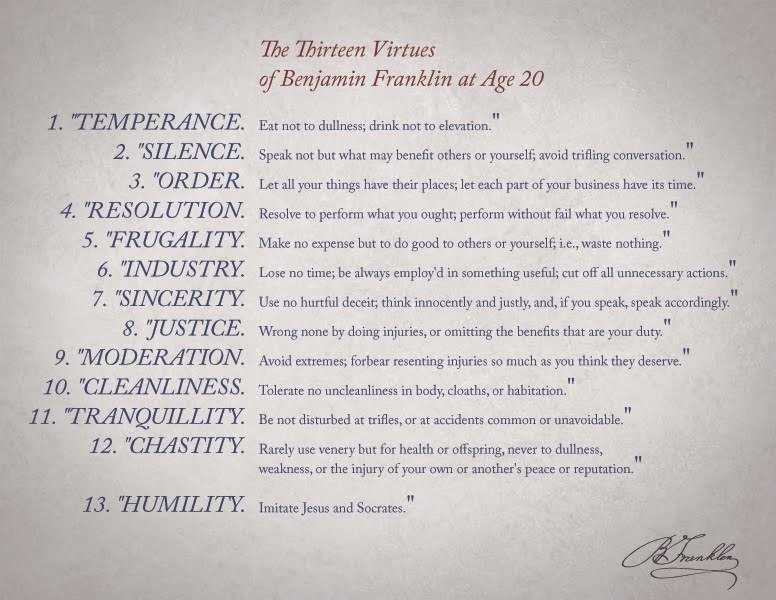 Suffice to say, Benjamin Franklin never attained his goal of moral perfection. The bar he had set for himself was impossibly high.

But the habit of self-improvement stuck. Keeping a journal had kept him accountable.

While Franklin never wasted an hour of his life, he thought self-reflection was too important for him to ignore. To that end, he never stopped questioning the value of his work and the motives behind each activity.

For instance, Franklin had the habit of asking himself two questions daily as part of the journaling process he had for his thirteen virtues. At the top of his journal was written the question: what good shall I do this day? He would return to self-reflection at the end of the day by answering the other question at the bottom of his journal: what good have I done today?

This was his daily integrity report. While he tracked the what and when during working hours, his time spent before and after waking up was spent on the why.

He never shied away from asking himself hard questions. While many who journal today spend most of their time on affirmations and inspiration, Franklin used his journal for the opposite: to keep a ledger of his moral failings. He would record on the left side of his journal a list of wrongs he had done, and on the right side what he had done to make up for it.

Amongst these wrongs were his tolerance of slavery. As the owner of the Pennsylvania Gazette, he allowed for the sale of slaves to be advertised. Eventually, he came to own slaves himself, although he remained apprehensive of this practice. But his greatest failing would be his agreement to a compromise, which enshrined slavery in the constitution.

Franklin would never be able to fully right that wrong, but he took steps to fix his mistakes even in his twilight years. He became the President of the Society For The Abolition of Slavery, and actively spoke out against the practice.

Franklin likely would have never considered himself to be in the habit of keeping a journal. But studying his life, we can see that he has done just that.

Most people focus on how forward-thinking journaling can be. There’s certainly nothing wrong with that, but I’m not confident it’ll necessarily translate into the results we seek. One of the pitfalls of journaling is that we gain a sense of accomplishment from just writing. It may be therapeutic, but it can also stop us from taking action that will bring us the results we seek.

Franklin used his journal to hold himself accountable and promote a bias for action. Our memories have been shown to be unreliable. Oftentimes, we tell ourselves a story to justify our actions. Franklin knew that, and took active steps to become a better person, instead of merely hoping that he would do good.

But just as important was his belief in the power of journaling. His journals would not have amounted to much if it was merely a mindless record of his life. Franklin trusted the process and made journaling a keystone habit which his life was based heavily on.

There is much to learn from Benjamin Franklin’s life. The manner in which he has used his journals for learning, reflection, and accountability is incredible.

But more importantly, you need to record your own story. Over the course of a lifetime, there’s no telling what keeping a journal can do for you.