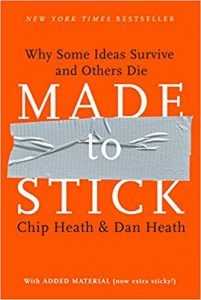 You can make your message stick around longer by keeping it simple, unexpected, concrete, credible, emotional, and with stories.

This is one of those classic pop psychology books (in a good way). Chip and Dan Heath are the best marketing professors around, and they’ve translated their academic research into something fun to read.

The book can be summed up with the acronym SUCCESS: use Simple, Unexpected, Concrete, Credible, Emotional, StorieS. You can see that the Heath brothers walk the talk – they’ve tried to make these ideas stick as well. Every bit is intentional.

Get Made to Stick on Amazon.