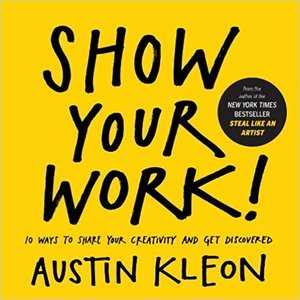 You need to collaborate with others and show your work; the story of the lone genius is a myth that needs to die.

Get Show Your Work on Amazon.

Show Your Work is a personal manifesto on how to get creative work of any sort done. If you do anything that involves personal expression – which basically includes just about everything – you’ll be inspired by how Kleon’s perspective on doing the work you love.

It’s also different from your typical book in just about every way. Unlike most books which go into the hundreds of pages, Austin Kleon keeps it short with powerful ideas on every page. True to Kleon’s roots as a “writer who draws”, the book is aesthetically pleasing and stands out with the various illustrations presented. If you liked Steal Like An Artist, you’ll definitely love this book.