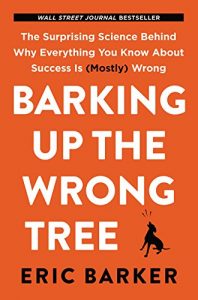 There’re a lot of counterintuitive things that determine whether we succeed in our work and lives, and what we know is probably wrong.

Eric Barker has been penning his thoughts at Bakadesuyo for years now. This is the culmination of his work.

If this is your first foray into pop psychology, I can think of few better places to begin than here. There’s no grand thesis that guides this book but Eric sprinkles in a ton of stories that makes you rethink how to approach the world. He has dived into the academic studies, reconciled conflicting conclusions, added his own opinion, and presented the information in an entertaining and memorable fashion. I only wish that there were more academics who wrote in this manner.

Get Barking Up The Wrong Tree on Amazon.

This contains some of the key lessons I’ve taken away, as well as interesting excerpts and quotes from the book. If you enjoy any of these, I’m sure you’ll find value from reading the book in its entirety.

The Power of Stories

Want to make sure you haven’t missed out on anything? Get Barking Up The Wrong Tree on Amazon.